(We connect you to those farmers who offer jackfruit(seasonal), banana in reasonable price)

Pure Honey: People of this region are practicing bee keeping and the harvested honey is of highest quality.The most common determinant of the flavour is the flora in the area where the beehives are kept and since the place is right in the middle of western ghat biodiversity hotspot ,without an aiota of doubt we say with conviction that the honey produced here is best available in South India.

Cane: There is a special kind of cane found here, wihich is of .a thick kind with black spots. It is much prized as making good walking sticks.

If you are interested in any of the above agricultural products, contact us a week before your visit. 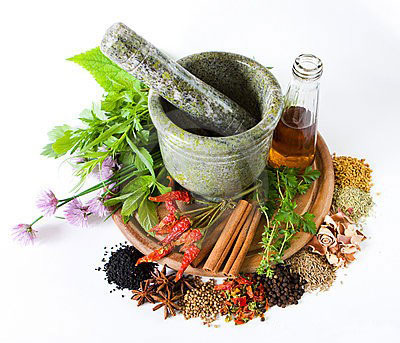 Kukke and surrounding areas of Dakshina Kannada district, which are part of the Western Ghats is known for its biodiversity, richness and endemism of different species. The Western Ghats is very rich in its medicinal wealth. The forests and hills of this region are a treasure house of number of medicinal plants. These plants are recognized by people to have reliable and effective medicinal values, are commonly used in treating and preventing specific ailments and diseases, play an essential role in health care. These are used as healers and health rejuvenators since time immemorial.

There are well known traditional medicine experts spread across Dakshina Kannada at various distances from Kukke, offering medicinal service to the needy. Herbal medical experts offer service for below aspects:

We help you to reach them for your medicinal needs.

Yakshagana, a dance drama is unsurpassed in exhibitng art of warfare or illusion of creating a scene of a battle. Many of the themes are taken from the epics. It is a fascinating folk drama with elaborate and colourful costumes, music and dancing. This unique combination of drama, dance and music is an old art of Dakshina Kannada and neighbouring Malnad districts. The Bagawata sings a ‘series of songs from Yakshagana Prasangas and conducts the play. It has been the practice for the characters to carry on the dialogue extempore. 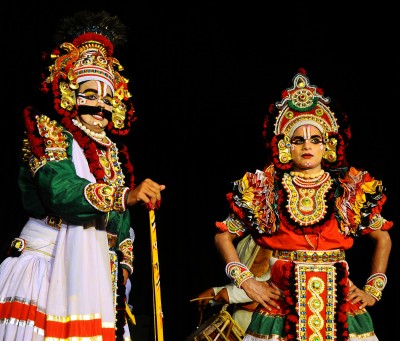 The Yakshagana has been, through the centuries, a vehicle of arts, culture and didactic instruction in entire rural parts. Yakshagana style of music depicts every type of emotions and situations in their songs and dramas. Over 160 ‘ragas’ were used in their compositions, though today Bhagavatas are rarely conversant with 30 ragas or so. There are few ragas that are not found even in classical music. The themes for the play are selected from the Ramayana, Mahabharata, Bhagavata and other Puranas. Barring a few narrative lines, all the rest are set to raga and tala. One essential element of depiction consist of music and the other, dance. Both had simple literary material as their basic text. The dance elements have good support from percussion instruments like Chande, Maddale and cymbals. The characters of the play wear ankle bells (gejje) too. The essence of the drama is conveyed to the audience in prose which is dependent on the textual content of the songs.

To an audience not conversant with the Kannada language, the range of costumes and make-up seemed to capture the grandeur of a wonderland, which is ably supported by a rich musical background. In totality, Yakshagana theatre is one of the few rich theatre forms that has persisted even today.

Such performances are held at places which are of reasonable distances from Kukke and here will publish date ,time and place of such performances.If you are interested to witness such unique culture of this region, we will arrange your travel to there and back to Kukke.

Watch this space for update of schedule 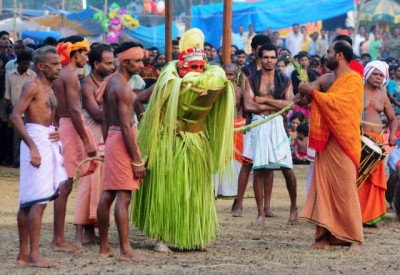 Bhootaradhane, worship of demi-gods is one of the distinct cultures of the coastal region. Ottekola is a local culture which is part of broader local culture of spirit worship. Lord Vishnumurthy, worshipped as god elsewhere here has been bestowed the place of a demi-god. With folk tales that depict the miracles of demi-god being famous in the region, the people have accorded powerful status to Vishnumurthy, believing that dedicated offering pleases him while non-commitment invites his wrath.

Devotees expressed their fervour to Vishnumurthy Daiva, worshipped as saviour of the land, as they run over a heap of burning charcoal neglecting the danger, known as kenda seve in local parlance as part of Ottekola. What seems more miraculous is that these religious devotees come out unscathed from rage of blazing coal in winter night . Though the offering sends shivers down the viewers, for the people involved in the act, it is all about faith.

When we see this from global perspective, this tradition can be seen as “Firewalking”, which is the act of walking barefoot over a bed of hot embers . Firewalking has been practiced by many people and cultures in all parts of the world, with the earliest known reference dating back to Iron Age India 1200 BC.

It is often used as a rite of passage, as a test of an individual’s strength and courage, or in religion as a test of one’s faith. Modern physics has explained the phenomenon, concluding that the amount of time the foot is in contact with the ground is not enough to induce a burn, combined with the fact that embers are not good conductors of heat.

Such performances are held at places which are of reasonable distances from Kukke and here will publish date ,time and place of such performances.If you are interested to witness such unique culture of this region, we will arrange your travel to there and back to Kukke.

Watch this space for update of schedule 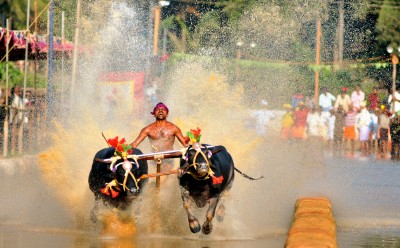 also in use for traditional Kambala in some regions for conducting time based races and training . A runner will make a pair of Buffaloes run on a track of muddy water. The runner will be driving those buffaloes all along the race.The time is recorded in case of single track buffalo race or he gets another competitor on the other track to decide who is best.

A popular quote explains everything about Kambala: “Hold your breath. Silence rules the air as thousands watch in stunned anticipation! The man is crouching behind the buffaloes on a slive of wood attached to the animals. Not a muscle moves. Only the wind is playing on his lock of hair. For him the race is all that matters. Suddenly the scene explodes, the man springs up, his hand cocked, his whip held high and the huge animals lunge forward,bellowing, their hooves churning the muddy waters and sending their wet spray in the hot air, their eyes wide, wild and white – man and beast engaged in onespurt of activity and one aim – victory.”

On as average 100-130 pairs of buffaloes and 20000 spectators participate each Kambala. There are 45 known kamablas presently held between the month of November to March out of which 15 are conducted under kambala association (Kambala samithi) on each weekends.

These Kamabalas are held at places which are of reasonable distances from Kukke and here we will publish date, time and place of such performances. Watching this will be really a privilege. If you are interested to witness such unique culture of this region, we will arrange your travel to there and back to Kukke.

Kambala festival is in verge of extinction following the Supreme Court of India orders.